One of the most common questions people have about Shih Tzus is whether they shed a lot. The answer to that question is yes, but not as much as some other breeds of dogs.

It is a common misconception that Shih Tzu dogs do not shed. In reality, they do shed – just like any other breed of dog! They may also have more fur than most dogs since their coats are thicker and longer. Owners might notice the change in texture and hair loss on clothes and furniture.

Some Shih Tzu puppies are heavy shedders, but others may not be. It all depends on the dog’s breed, age, how often it is brushed or combed, etc.

The best way to deal with shedding is to brush your pet regularly with a comb or rake designed for dogs’ coats, typically called a slicker brush.

To learn more about this topic, this blog post will discuss how much Shih Tzus shed and what you can do about it.

What Are Shih Tzus?

Shih Tzu is a Chinese name for a dog that means “Lion Dog.” As its name implies, Shih Tzus are lapdogs that resemble a lion, but tinier versions. They are energetic in youth but generally slow down in later life. They have an alert expression and high intelligence. The adult Shih Tzus weight is between nine to 16 pounds.

Their history is surrounded with mystery, although it is believed that they are the result of crossbreeding between Pekingese and Lhasa Apso in Tibet or Asia Minor. Afterwards, they were introduced in China, where the nobility used them as pets.

When Buddhism spread to China, this breed also became known as Buddha’s Dog. They were also called the “Chrysanthemum Dog” because they were especially favored in imperial Chinese palaces. But remember, while Shih Tzus are called Chrysanthemum Dogs by the Chinese, their correct name remains as Shih Tzu.

The breed became popular outside of China during the later part of the 19th century when it was given to both the English and Japanese royal families.

The dog breeds have been known in Europe since 1871, but they were not popular outside of their native China until after World War II. Afterwards, they were taken by U.S. servicemen returning home from Asia as personal pets.

Shih Tzus are good-natured, devoted, and alert dogs that don’t like to be left alone too long, so it would be ideal if they had somebody watching them all the time. 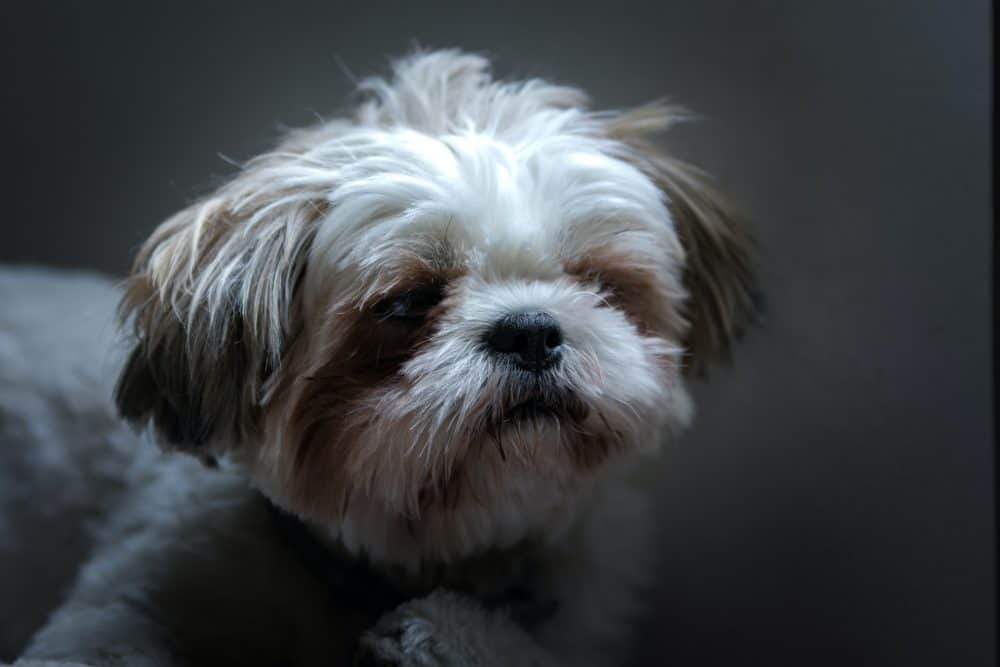 The Shih Tzu’s coat is a double-layer type, with a thick, coarse outer layer and a soft wooly undercoat. This makes the coat water-resistant and means that the Shih Tzu doesn’t tend to blow its coat as often as other breeds. The coat will grow long enough, almost to touch the ground. The Shih Tzu sheds continuously, so regular grooming is essential.

What Is a Double-Coat?

The double-coat is a type of coat that has two layers. The top layer, or topcoat, is much longer than the under layer. The undercoat is generally much shorter and provides warmth for the dog when it’s cold out. Many double-coated dogs will blow their coat to shed the undercoat and make way for a new one.

The Shih Tzu’s double coat makes them such good apartment dogs, as they don’t shed as much as many other breeds.

A Shih Tzu’s hair growth is not as high-maintenance as many other dogs, but it still needs some attention. With the Shih Tzu breed, it is common to lose hairs, mainly in adult Shih Tzu.

Matting in Shih Tzus is very common, especially during this phase, and owners need to watch their dog’s fur. The dog may even need its grooming appointments more frequently than usual.

After the undercoat is done growing, it then enters into what’s called the telogen phase. This is when the dog will spend three months without any new hair growth, with its old coat staying in place. Finally, about a month after this phase ends, the anagen phase begins again, and another coat comes in to take over.

The Shih Tzu’s coat can take up to two years to fully transition from the adult coat view the undercoat. How often a dog sheds has a lot to do with its genetics, but outside factors such as health and diet will also play a role in how much it sheds, which is why a healthy, well-fed dog will shed more like a puppy than it will as an adult.

The last part of Shih Tzu’s hair growth cycle is the catagen phase. This only takes one month, and this phase marks the end of a dog’s coat growing cycle. The old undercoat will separate from the longer topcoat during this period and fall out completely.

Does a Shih Tzu Shed More? 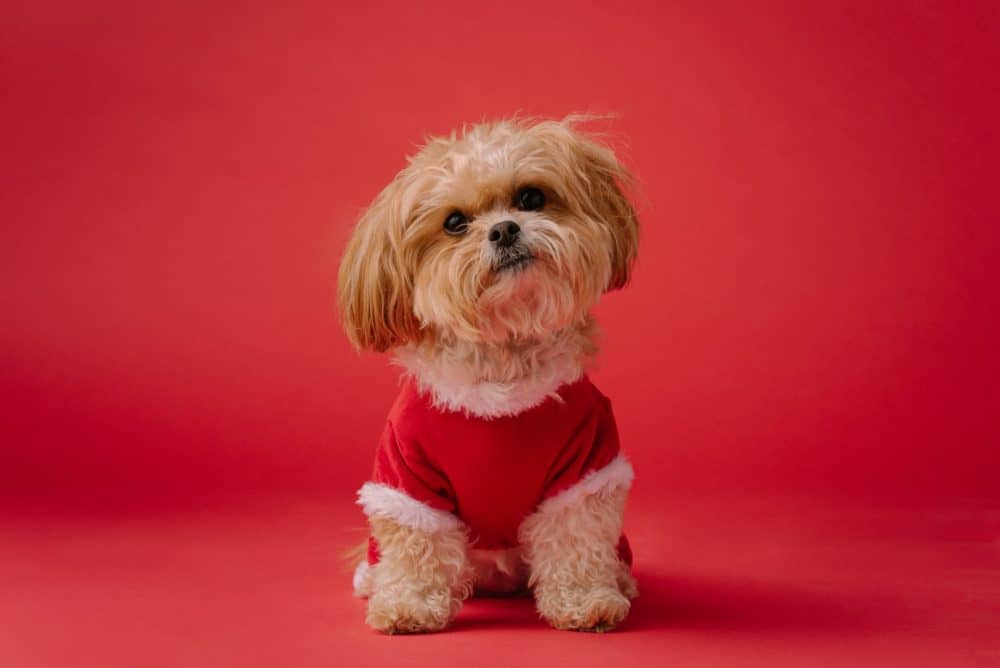 The Shih Tzu is not considered a heavy shedder, but it still sheds throughout the year. They commonly blow their coats twice per year. For this reason, you should brush your dog regularly so they don’t turn into a matted mess. The Shih Tzu shedding is common within the already present hair follicles. Don’t mix Shih Tzu with Yorkshire Terriers.

Even though the Shih Tzu puppy is known for its beautiful coats, think about all the hair you will be vacuuming up if you plan to get one.

Shih Tzus have a double coat, which means they can’t handle being in scorching climates. They do better in cooler climates, where there is plenty of shade for them to cool down under. Matted hair pulls on the Shih Tzu’s skin and causes pain and discomfort to them.

Shih Tzus also need frequent brushing so their fur doesn’t get too tangled. The more tangles there are, the more likely the dog will become matted. While this may not be a problem for puppies, it can be excruciating for adult dogs to have mats near their skin.

No, Shih Tzus are not hypoallergenic. Some people seem to think that they aren’t as likely to trigger an allergic reaction in their owners because they don’t shed.

Shih Tzus still produce dander, which causes many people’s allergies to act up. Even though the breed is generally considered non-shedding, it doesn’t mean that there isn’t dog hair around your house or in your car.

Some people think that Shih Tzus aren’t likely to trigger an allergic reaction in their owners because they don’t shed.

No matter what type of coat a Shih Tzu has, whether it’s long and flowing or short and curly, their hair will grow back completely if cut. This means they shed all year round, and you can expect to give them a nice brushing at least twice per week.

If you plan to get a Shih Tzu, make sure your home is ready for all the hair they will be shedding!

How to Deal With Shih Tzus Allergies?

Even though Shih Tzus are considered non-shedding dogs, they still produce dander.

If you are allergic to dogs, allergies can be triggered by the proteins in your dog’s saliva, urine, and feces. If you notice that your eyes or nose are itchy after spending time with your dog, then there’s a good chance you’re allergic to them.

If your allergies are mild, they can be managed with over-the-counter antihistamines. If you have a severe allergy, then you may want to consider one of the prescription nasal sprays or inhalers your doctor can prescribe for you.

Causes of Shedding in Shih Tzus 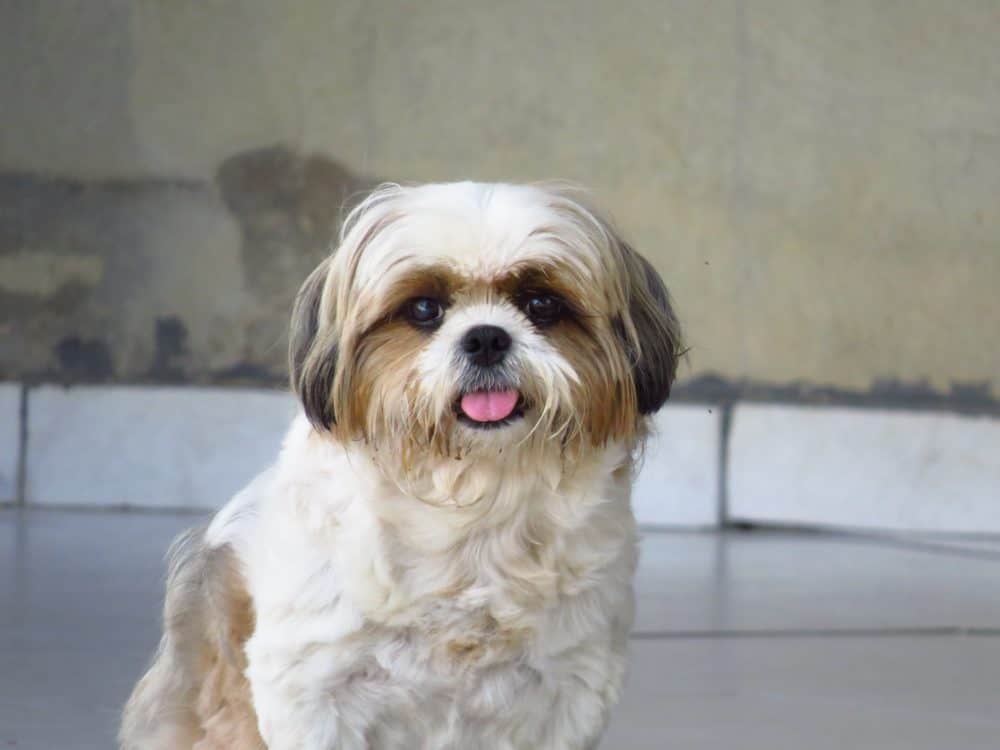 There are many reasons why a dog will shed. If your Shih Tzu starts to lose hair, make sure to talk with your vet. Some of the most common reasons for shedding include:

This is the most common reason owners notice their dog’s coat change. The best way to prevent seasonal allergies and sheds is to ensure your dog has regular check-ups.

The thyroid gland is responsible for producing hormones in your dog, and when it is underactive (hypothyroidism), it will cause its skin and coat to dry.

This disease causes your dog’s adrenal glands to produce too many hormones, and it can also cause skin problems. Sometimes this disease will show up as hair loss on the dog’s face or other parts of their body exposed to more sunlight.

This is a serious condition that affects your dog’s metabolism. It causes them to lose weight even though they have an increased appetite, their gums will become very pale, and they may have itches that don’t go away.

A dog with low blood sugar won’t have the energy to do things like grooming itself. This can cause them to lose their hair, leading to more serious conditions if their blood sugar level remains low for a long time.

There are a few things you can do to reduce the amount of hair your Shih Tzu sheds all over your house.

As mentioned above, Shih Tzu’s coat needs to be brushed regularly. When necessary, the two layers are also combed in different directions with a metal comb that reaches down into the undercoat to remove dead hairs. The Shih Tzu is a low-odor breed and does not have a characteristic doggy odor. Their coats do not tend to pick up the smell of food, and as with all breeds, this is an individual characteristic.

In addition to brushing your dog’s coat, it may be necessary from time to time to have a professional groomer “Shed-less” your Shih Tzu.

YES! Dog food matters a lot! The Shih Tzu should be fed small meals throughout the day rather than one large meal, as this will help prevent bloat or stomach torsion. It is also essential to avoid any food or treats that may trigger pancreatitis. Oils, being rich in omega-3 fatty acids, can help reduce shedding. Bloat can occur in any dog breed but is particularly common in large breeds such as the Great Dane. Bloating occurs when the stomach twists on its axis and air become trapped within the dog’s body. This causes a painful swelling on the lower parts of the ribcage called gastric dilatation-volvulus (GDV). Therefore, diet affects it considerably.

Like most breeds, the Shih Tzu is prone to certain hereditary conditions and will require specialist veterinary care and a comprehensive health check from a breeder before purchase.

Cataracts are a condition that causes the eye lens to become cloudy and can eventually progress to partial or complete blindness. Cataracts can be inherited from parents who have particularly clouded lenses themselves, although they may also result from aging or injury to the eye. The Shih Tzu is a generally healthy breed of 11 to 13 years.

Shih Tzus are sweet dogs that offer their family lots of love and affection. Because they haven’t been as popular as other breeds in the past, many people don’t know a lot about them, which can make it difficult to find a good breeder for your puppy. Even if you have never owned a dog before, you can make a good choice for yourself and your family.

The Shih Tzu is a toy dog breed known for its long, flowing coat. One of the most common questions asked about this breed is whether it sheds. The answer to that question depends on who you ask! Some people say that they do, while others say they don’t. Either way, there are many ways to reduce shedding with this adorable dog’s long hair.