Most dog owners make the same vow when they decide to bring home their fur baby: they promise themselves and their family that Fido will NEVER be allowed on the sofa. Sadly for them, Fido didn’t get the memo and ultimately used those soft furniture as his own! 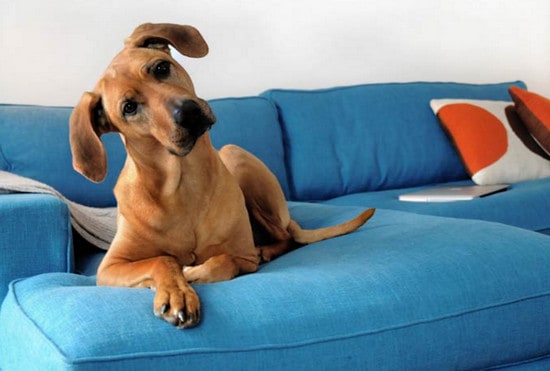 So why do dogs like being on the furniture so much? What it is about our stuff they just have to clamber all over? The answer is incredibly simple: take the sofa for example, it is a soft, squishy, comfy place to lay one’s head. It comes with the added bonus of extra cuddles with you or if you’re not there, it smells of you (which is equally reassuring to him).

The floor on the other hand is hard. But don’t despair, there are things you can do to keep him off the furniture. We cover 4 of them below that you can try.

Give your pup has his own bed from day one (especially to save your furniture from the destructive chewing and accident prone phases) and don’t let him up on the sofa until he’s at least 1 year old. You want him to learn to be independent of you, that he can sleep, relax and be apart from you without his world coming crashing down. Just think how much you value your bed, he too will appreciate having a safe place that is only his that he can retreat to at night and for naps (it should also limit the amount of fur and hair he is likely to spread around the house).

If he is really reluctant to go to his bed show him that it is a fun place to be: occasionally throw treats in there to encourage him in, or place toys in there for him to play with. The more you can reinforce positive association with the bed, the happier he will be to spend time in there.

2. Use treats as reward

If you don’t mind having him on the sofa, but you do want him to get off it, willingly, from time to time, then you are going to have to teach him the ‘off’ command. The easiest way to teach a dog anything is through their stomachs. The first thing you will want to do is teach your dog that good behavior results in a treat being rewarded. Once he knows he will get a treat when he is good, pick a word that you want to use to get him off the sofa, maybe ‘floor’. Say your word and toss a treat on the floor, make sure he sees it land, he will follow it. Keep practicing when he is on the sofa.

After a while say your word and pretend to throw the treat. When he gets off to go looking for it give him a treat from your other hand. Repeat a few more times until you feel you can cut the treats down and replace them with praise instead. Just occasionally however reward him with a treat when he does get off the sofa, it will keep him on his toes!

Set upturned laundry baskets on the cushions. Turn dining chairs upside down on the cushions. Make your sofa as inaccessible to Fido as you possibly can. If however you come home to find your barricades in pieces, next time booby trap them. Half fill empty water bottles and Tupperware containers with small stones or pebbles. Place the rattlers in the barricades, then when Fido tries to hop on the sofa he will dislodge them and send the rattlers flying, they will make a very loud, scary noise. Experience has shown this will send him running!

4. Use a Training Collar

This is a bit controversial method. Some people don’t recommend training collars at all no matter what. But if you see no other positive re-enforcement methods to keep your dog off furniture, then you can use a training collar. You may check out some of the best ﻿dog shock collars reviewed at Dog Collar Zone website from where you can choose a suitable collar.

In summary, it doesn’t have to be a losing battle, there are options: many tricks and tips that you can apply to keep him at arms length. Make life easy for yourself from the off by teaching your dog that couch time, or being on any of your furniture, is a privilege that is earned, not assumed. Make his bed space as appealing as possible to convince him that he doesn’t have to be in yours and always reward good behaviour. If all else fails and you can, just shut the door and ban him from going in. He can’t get on the couch if he can’t into the room!